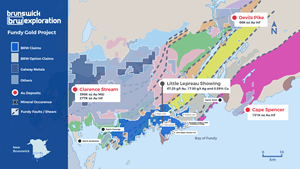 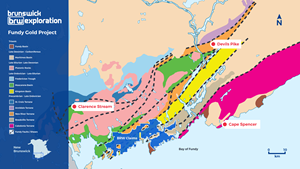 MONTREAL, Oct. 27, 2020 (GLOBE NEWSWIRE) — Brunswick Exploration Inc. (“BRW” or the “Company”) is pleased to announce that is has acquired a district-scale gold-silver property, totaling 37,260 hectares (372.6 sq. km), in southern New Brunswick, collectively known as the Fundy Gold Project (“Fundy Gold” or the “Project”). The newly acquired terrain is located West of the City of Saint John and covers 40 kilometres of strike length of the Fundy Shear Zone, a regional, deep-rooted, sparsely-explored Appalachian fault system. The Fundy Gold Project includes new outstanding discoveries made in 2020 by prospector Rob Murray and 24 historical, gold-silver, polymetallic and base metal mineral occurrences. Concurrent to the staking, BRW has entered into an option agreement with Mr. Murray, through Geosearcher Inc., that includes the 2020 discoveries; see Figure 1 and highlights below:

Highlights from the optioned ground include (all grab samples):

Highlights from 21 historical showings across the Project area include (all grab samples):

Mr. Robert Wares, Chairman and interim President of BRW, commented: “We are very happy to announce this new, large scale project that includes a major, regional fault system hosting high-grade gold-polymetallic vein showings in southern New Brunswick. The size of this property along a major fault package is impressive and would be akin to staking the entire Cadillac Fault in the Abitibi from Malartic to Val-d’Or. Southern New Brunswick has garnered more interest recently with Galway Metals’ Clarence Stream project and work on the Cape Spencer and Devil’s Pike gold deposits. It is astonishing how little work has been done historically along the Fundy Shear Zone, despite gold showings being known for several decades, mostly along the coast. Prospecting work done inland in 2019 and 2020 rapidly led to the discovery of new well-mineralized showings. These high-grade vein showings open up the gold potential along the Fundy Shear Zone along a 40 kilometre strike length which is now 100% controlled by BRW. Prospecting is ongoing and we are preparing a vigorous surface exploration program in 2021 to unlock the potential of the Fundy Gold Project”.

The Fundy Gold project is located 15 minutes from the city of Saint John and extends roughly 45 kilometres to the city of St. George. The Fundy Gold project is located within the Fundy Shear Zone that borders the Avalon Geological Terrane, the latter having yielded approximately 6.0 Moz gold production in the Carolina Slate Belt in the USA. The newly acquired ground has been poorly explored, most work being geological in nature with limited surface prospecting.

The area is considered highly prospective as it includes several vein gold-polymetallic showings within the broad Fundy Shear Zone. This major structure cuts across all of southern New Brunswick and comprises multiple deep-rooted faults that expose panels of sedimentary, volcanic and granitoid rocks, as well as mylonites, juxtaposed during multiple orogenic events over an extensive time frame (Late Proterozoic to Carboniferous, see Figure 2).

Alongside the staking program, BRW optioned 5 claims representing 89 units and 1,914 hectares from Geosearcher Inc. The option allows the Company to acquire a 100% interest in the properties under the following terms:

The schedule can be accelerated at the Company’s discretion. There are no minimum work expenditures to complete the purchase.

BRW will also grant a two percent (2%) NSR on the claims covered by the option agreement. The first half (1%) of the NSR royalty may be repurchased upon payment of one million Canadian dollars from BRW to the Optionor. The second half may be purchased for two million Canadian dollars. If BRW elects to complete both payments, it will have repurchased the entirety of the royalty.

The scientific and technical information contained in this press release has been reviewed and approved by Mr. Charles Kodors, P. Geo, licensed professional geologist in New Brunswick.

The Company, formerly Komet Resources Inc., is part of the Osisko Group of companies and is a Montreal-based mineral exploration venture listed on the TSX-V under symbol BRW. It has sold all of its African assets and is now focused on exploration and development of gold and base metal properties in Eastern Canada. Current projects include gold-polymetallic vein systems in southern New Brunswick (Fundy Gold Project) and base metals VMS in Northern New Brunswick (Bathurst Mining Camp) and in the Chibougamau region of Quebec (Waconichi).

Meltwater announces agreement to acquire leading social influencer marketing company Klear for $17.8 million in a combination of cash and earn-out