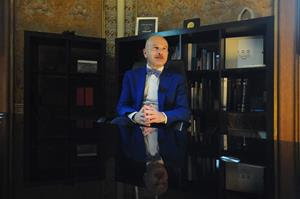 ROME, Oct. 24, 2022 (GLOBE NEWSWIRE) — Luiss Rector Andrea Prencipe received the Journal of Business Venturing’s Best Paper Award for the paper “The Language of Investments: How Language-Structure Influences Crowdfunding Investments.” The study was conducted with Professors Francesca Di Pietro, University Milano Bicocca, Francesca Masciarelli, University G. d’Annunzio Pescara, and Vangelis Souitaris, Cass Business School. It explores how language can predict individuals’ investment choices and their propensity for entrepreneurship. The study relies on the assumption that language predicts people’s investment behaviour and entrepreneurial propensity. Languages are divided into those that rarely distinguish present and future time (such as German, Dutch, Swedish, and Chinese, i.e., weak-future languages, and those that have a marked distinction between present and future time such as French, Italian and English, i.e., strong-future languages. Speakers of weak-future languages appear to perceive future events as closer than do speakers of strong-future languages. Speakers of weak-future languages are likely attracted to the idea of personally investing in entrepreneurial ventures, including crowdfunding investments. By linking language, culture, cognitive frames and economic behaviours, the study adds an important and interdisciplinary explanation for cross-country variation in early-stage crowdfunding investment, and our findings have important practical implications for entrepreneurs, crowdfunding investors, and policymakers.

This important award confirms that in Luiss the education model combines academic rigour but, at the same time, practical relevance. «Our faculty comprises academic professors and practitioners from the real world – meaning executives, diplomats, representatives from public administration», said Luiss University Dean, Andrea Prencipe. Rome’s Luiss University is revered for both its physical beauty and educational excellence, blending its rich history with the digital age of the present to prepare students that shape the future. Throughout its four departments of Economics and Finance, Business and Management, Law and Political Science, the private university offers an innovative educational approach which is gaining increasing international recognition.

«In Luiss students will have the opportunity to grow their mindset. They will have the opportunity to acquire tools that will enable them to face the complexity and the discontinuities of the challenges that they will face once they will enter the job market. Those challenges, as we know, are increasingly complex, often more discontinuous. So a change in the mindset is fundamental and our programs do that», said Prencipe.

A photo accompanying this announcement is available at https://www.globenewswire.com/NewsRoom/AttachmentNg/60095220-e2c0-46ed-a26d-b4679f8f8fd2