To celebrate the official completion of the Southern Hemisphere’s tallest tower, Australia 108, the Melbourne Symphony Orchestra will play its highest ever concert in the building, to be streamed for free around the world.

Located in Melbourne, the super-tall tower is now complete and an incredible new sight on the city skyline. It lifts the bar in terms of residential addresses, boasting the highest residences in the Southern Hemisphere.

To celebrate the building’s completion, orchestra members will perform a sky-high repertoire from 7:30pm on Sunday 21 March (Australian Eastern Daylight Time AEDT) from different spaces within the landmark tower’s luxurious 2,800 square metre Star Club, including from one of its eye-catching infinity pools that hover 212 metres above the streets below.

The performance will be broadcast free from MSO’s YouTube channel (link here) and give architecture and design fans – along with music lovers – a look inside the prestigious private Star Club, home to some of the most luxurious amenity experiences in the world.

The Star Club is located within the building’s distinctive golden cantilevered Starburst, which protrudes up to eight metres from the structure from levels 70 and 71.

World Class Global CEO David Ng said the concert aimed to celebrate the completion of the Australia 108 landmark on Melbourne’s skyline and welcome it to the cityscape.

“The Melbourne Symphony Orchestra has set the beat of the city with its world-class performances for more than 100 years. We could not think of a more appropriate way to welcome Australia 108 to the skyline than through a concert for all Melburnians to enjoy,” Mr Ng said.

Australia 108, the tallest residential tower in the Southern Hemisphere 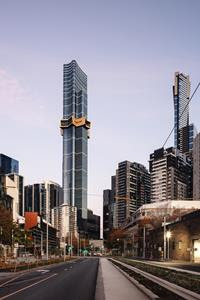 Australia 108, the tallest residential tower in the Southern Hemisphere, is now complete, rising 319 metres from the streets of Melbourne.

“We hope this performance inspires music lovers and Melbourne lovers alike to dream large and look up, as Australia 108’s height reminds us just what is possible.”

Construction of Australia 108 – which comprises 1,105 apartments – commenced in 2015, with Multiplex spending the first 12 months on groundworks, driving over 200 piles up to 46-metres deep. A workforce of 3,252 tradespeople and consultants were employed during the development journey of the $1 billion project.

Unveiled last month, the Star Club at Australia 108 boasts everything a resident could hope to enjoy including two infinity edge swimming pools perched 212 metres above ground, expansive lounges, meeting spaces, elegant dining rooms, a theatre, two expansive gyms, as well as a vertical sky-garden. This civic area is envisaged to become a resident hub and remote working option above the clouds.

Nicky Drobis, director at Fender Katsalidis, said the practice relished the opportunity to meaningfully contribute to Melbourne’s skyline again in a way that complements the building’s surrounding urban forms.

“The development of Australia 108 has been an incredible journey for our firm and we are thrilled with the outcome we have achieved for Melbourne, in both a residential and architectural context,” said Ms Drobis.

“Australia 108 is an innovative and original tower with world-class resident amenity that puts it at the forefront of modern, high-rise living, while also being a striking fixture in the skyline for everyone to enjoy.”

In December last year, a selection of premium Cloud Residences debuted on the market, commanding prices between $1.9 million for a three-bedroom living space and up to $5,558,000 for a Nova sub-penthouse on level 97.

A private sales gallery is located on the ground floor at 70 Southbank Boulevard, with private appointments available seven days a week. To make an appointment, call CBRE on 1300 888 770.

The Group may in future expand to property development in other sectors such as the industrial and hospitality sectors and may acquire or develop new properties in Australia, Indonesia, Malaysia, New Zealand and the Philippines.

Photos accompanying this announcement are available at:

Meltwater announces agreement to acquire leading social influencer marketing company Klear for $17.8 million in a combination of cash and earn-out