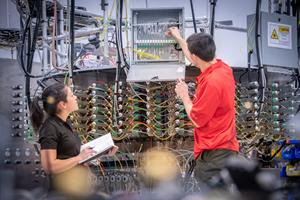 The results come as the company celebrates its 20th anniversary. In that time, it has completed over 200,000 plasma shots, achieved 150 patents and patents pending, and grown to a team of more than 200 employees. Using large-scale prototypes, General Fusion has proven its core technology approach. Today, it announces additional advancements in its plasma and compression technologies.

“In 2002, I founded General Fusion with the vision of creating a technology that would combat climate change and end the world’s reliance on fossil fuels for power. To be successful, I knew I needed a practical method that overcame longstanding barriers to commercializing fusion. That’s why I chose Magnetized Target Fusion,” said Dr. Michel Laberge, Founder and Chief Science Officer, General Fusion. “After 20 years – to see our core technologies proven out and ready to be put together in the fusion demonstration – it’s an incredible feeling.”

Creating fusion energy with MTF starts with a hydrogen plasma injected into a vessel lined with liquid metal. Next, high-powered pistons compress the liquid metal around the plasma, squeezing and building pressure until the plasma reaches more than 100 million degrees Celsius – and fusion occurs. The technology depends on three core factors to be successful: hot plasmas that hold their energy long enough to be compressed, a synched compression system, and a stable fusion process that will increase neutron yields and temperatures when plasmas are compressed. General Fusion’s plasma injector PI3 is the world’s largest and most powerful of its kind. It generates plasma targets with confinement times exceeding predictions from accepted scaling laws and consistently achieves the conditions required for the company’s fusion demonstration. Today, General Fusion is creating the plasmas it needs, achieving 10 millisecond energy confinement time without requiring active magnetic stabilization, auxiliary heating, or a conventional divertor. The plasmas reach a temperature of 250 eV, almost 3 million degrees Celsius, the starting plasma temperature required for the company to compress the plasma to fusion conditions. Combined with known scaling laws, these results and modelling provide confidence that the company’s fusion demonstration is on track to meet its target temperature of 10 keV.

General Fusion takes a pulsed approach to create fusion energy. This means, unlike a tokamak, its plasmas do not need to be sustained for long periods. Instead, the company uses mechanical compression to achieve fusion conditions. This is done with high-speed drivers that are timed to rapidly create a precisely shaped, symmetrical collapse of a liquid metal cavity, which envelopes the plasma. General Fusion’s primary compression prototype has completed over 1,000 shots, consistently achieving its compression performance targets. In addition, researchers and engineers have used test results across a range of compression parameters to validate and refine their fluid dynamic models to a high degree of fidelity. These models show that the fusion demonstration can achieve a shaped collapse in a liquid metal cavity within approximately five milliseconds. This is sufficient for the thermal confinement times already achieved within General Fusion’s existing plasma prototypes.

These two recent milestone announcements build on the significant technological advances previously achieved by General Fusion’s team since the founding of the company in 2002.

“Commercializing fusion energy is within reach, and General Fusion is ready to deliver it to the grid by the 2030s,” said Greg Twinney, CEO, General Fusion. “We have the right team, the right technology, and the right strategy to get us there.”

About General Fusion
General Fusion pursues a fast, efficient, and collaborative path to practical fusion power. We are completing an aggressive development plan to deliver economical carbon-free fusion energy with our proprietary Magnetized Target Fusion technology by the 2030s. Our mission is supported by a global syndicate of leading institutional investors, venture capital firms, and technology pioneers, together with governments across North America and Europe. General Fusion collaborates with a global network of partners to create a sustainable future built on cleaner energy, better materials, and a comprehensive life cycle approach to the world’s infrastructure. Founded in 2002, we are headquartered in Vancouver, Canada, with additional centers co-located with internationally recognized fusion research laboratories near London, U.K., and Oak Ridge, Tennessee, U.S.A. Learn more at www.generalfusion.com.

A video accompanying this announcement is available at