Football: finalists Globe Soccer Awards 2022 elected by 10 million votes from fans all around the world 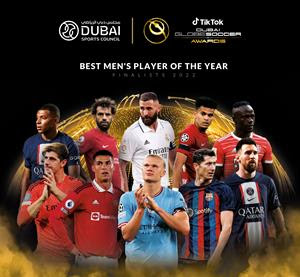 After a successful first round of public voting, yielding a record-breaking 10 million votes, football fans worldwide have now elected the finalists for the Globe Soccer Awards 2022 who will advance to the second and final round of voting.

The second and final round of public voting to choose the winners in the main categories is now open at voting.globesoccer.com and will close on 10 November 2022. This year’s winners will once again be chosen by the fans and an international jury of sports coaches, directors and club presidents. Voting for the TikTok Fans’ Player of the Year award is taking place on TikTok platform. Similarly, voting for the Socios.com Fan Activation of the Year will take place on the Socios.com platform.

The winners for all categories will be announced at the awards ceremony on Thursday, 17 November at the Madinat Jumeirah in Dubai, with the winners of others special categories: Best Transfer Deal of the Year, Maradona Award for Best Goal Scorer of the Year, Best Executive of the Year and Career Awards.

A photo accompanying this announcement is available at https://www.globenewswire.com/NewsRoom/AttachmentNg/5f6705c1-8828-448a-b50f-cb199c7ae040
The photo is also available at Newscom, www.newscom.com, and via AP PhotoExpress.