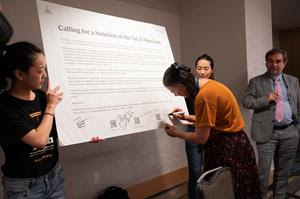 Dr. Holly Folk, professor of humanities and social sciences at Western Washington University, signs a petition for the Taiwanese government’s redress of the Tai Ji Men case at the IRF Summit 2022 in Washington on June 30, 2022.

WASHINGTON, July 08, 2022 (GLOBE NEWSWIRE) — The International Religious Freedom (IRF) Summit 2022 took place on June 28-30 in Washington, D.C., with religious freedom advocates from around the world in attendance. Two breakout sessions at the summit addressed the Tai Ji Men case–a case of violations of religious freedom and human rights in Taiwan that has lasted for over 25 years.

On June 30, the Action Alliance to Redress 1219 organized a breakout session under the theme of “The 2022 Review of Taiwan’s Implementation of the Two UN Human Rights Covenants and the Tai Ji Men FORB Case.”

A film was presented at the beginning of the meeting, featuring the international review of Taiwan’s third national report on UN human rights covenants (the ICCPR and ICESCR) by nine international human rights experts in May 2022. The conclusion of the film represented the views of many scholars: “The two covenants have been in force in Taiwan for 13 years. However, they simply exist in name. Human rights are not being respected in government agencies. Over the years, the international reviewers’ concluding observations and recommendations have not been taken seriously. The basic human rights guaranteed by the two covenants, such as freedom of religion, have yet to be implemented.”

Charlotte Lee, an attorney in Taiwan and a representative of the Action Alliance to Redress 1219, pointed out the violations of the two covenants in the Tai Ji Men case, such as the fact that Taiwan’s National Taxation Bureau issued ill-founded tax bills to Tai Ji Men and treated Tai Ji Men differently from other martial arts and religious groups, which violated the protection of equal rights and the principle of non-discriminatory treatment under Articles 2 and 26 of the ICCPR and Article 2 of the ICESCR. She also indicated other violations of the two covenants, including the prosecutor’s investigation, which resulted in cruel treatment of the master and disciples of Tai Ji Men, a violation of Article 7 of the ICCPR.

Alessandro Amicarelli, president of the London-based European Federation for Freedom of Belief, visited Taiwan before and was invited to teach courses on human rights and religious freedom there. He praised Taiwan’s incorporation of the two international covenants on human rights into Taiwan’s domestic law in 2009. This is a very significant step towards full democracy in Taiwan, he said, adding that the final recommendations of the third review of the two covenants in May of this year failed to mention freedom of religion. He noted that since the Tai Ji Men case is still unresolved, he and other scholars and human rights activists would continue their efforts to urge the Taiwanese government to improve by organizing monthly seminars and publishing articles and books.

Dr. Donald Westbrook, a lecturer for the Library & Information Science Department at San Jose State University, USA, visited Tai Ji Men Qigong Academy in Los Angeles in February 2022, which allowed him to gain an even deeper understanding of the beliefs, practices, and community of this group. He stated, “I come to you today primarily as a religious studies scholar and teacher who is most disappointed about the ongoing injustice in Taiwan with respect to this case. I say this with respect to the tax case, certainly, but also in light of confiscated sacred land in Taiwan and the clear infringement on human rights and religious freedom.”

Regarding the protection of freedom of religion or belief, he stated, “But making this a lived (and legal) reality, needless to say, can be an entirely different manner, as others have already addressed in connection to Taiwan’s domestic implementation of two human rights covenants. In particular, the failure to adequately address freedom of religion or belief (FORB) and the rights of taxpayers is disappointing as much as it is perplexing.”

Another breakout session on the Tai Ji Men case focused on the theme “Tai Ji Men: International Ambassadors of Peace and Goodwill and Their FORB Case.”

Dr. Hong, Tao-Tze, zhang-men-ren (grandmaster) of Tai Ji Men, delivered a video message, emphasizing, “Among the rights that human beings are born with, the main and most important one is the right to freedom of religion or belief.” “We believe that conscience, which is the core essence of faith, will serve as a talisman in defending people’s rights to religious freedom. Life is a series of struggles and exploration. Although our time on this planet is limited, through faith, our conscience and innate kindness will be awakened, motivating us to unite hands with more people inspired by compassion and care, to unite and sincerely support one another. To attain harmony and peace among people, between humans and nature, and between humans and other living things, we must take positive action and reflect on ourselves daily and never give up.” He also encouraged global citizens to defend freedom of religion or belief around the world, bravely temper their spirituality, and move forward for true peace and sustainability for all.

A movie titled “Who Stole Their Youth? The Tai Ji Men Case in Taiwan” was presented during the forum. The movie, written and directed by Prof. Massimo Introvigne, an Italian sociologist and the founder and managing director of the Center for Studies on New Religions (CESNUR), answers three questions: What is Tai Ji Men? What is the Tai Ji Men case? Why the protests?”

The film was followed by the speech of Marco Respinti, director in charge of Bitter Winter magazine. He praised Taiwan, saying, “Taiwan is a beautiful country, inhabited by beautiful people, great people, great culture, great food.” He also pointed out that Tai Ji Men is an organization “totally dedicated to spreading peace, love, and harmony in the world. And this movement has been falsely accused of an awful crime of tax evasion. The serious consequences of these blatant lies remain.” He noted that the Tai Ji Men community has been deprived of their freedom of religion or belief and advocated for an immediate redress of the injustice: “We need a decision from the Taiwanese state to end this case, because there is no understandable reason to keep that on. There is no legal reason for Tai Ji Men to be curtailed from its fundamental freedom, religious freedom. The solution must come and must be political.”

Dr. Holly Folk, professor of humanities and social sciences at Western Washington University, has visited Taiwan many times and loves Taiwan. She said that she was not surprised that the case happened in Taiwan and that her remarks are not an attack against Taiwan. She stated, “What Tai Ji Men has faced happens very often, in many countries, even in first world democracies. Religious minorities very often face a distinct type of harassment through bureaucratic regulation.” “The tax case has been used to erode the financial situation, membership and the morale of the Tai Ji Men community. It’s also been used to send the group into permanent legal ambiguity. And that is the point. And that is something that has happened to other groups around the world as well,” she added, emphasizing, “If a religious minority is attacked as a cult or a dangerous social organization, the same strategies are very, very easily activated against secular organizations, against environmentalists, against people pushing for LGBT equality. In other words, everybody, secular and religious, has a stake in this game.”

Pamela Chen, a representative of the Tai Ji Men dizi (disciples), shared her experience as a victim of religious persecution. When the Tai Ji Men case began, she had just graduated from college, and she risked being followed, bugged, and detained by the prosecutorial and investigative authorities, bravely serving as a contact person with the defense lawyers for the Tai Ji Men case. At the time, she felt as if the White Terror had reappeared. Twenty-five years later, the persecution is still going on. Now a mother, Pamela understands that as a victim she must be braver and stronger, and she brings her daughter along to promote reform in Taiwan to help it become a truly free and democratic country where human rights prevail.

The issue of human rights violations in the Tai Ji Men case has attracted a lot of attention at the IRF Summit, where Tai Ji Men members introduced the case to attendees from around the world and invited them to co-sign a petition calling for a solution to the Tai Ji Men case. It is stated in the petition: “We join Tai Ji Men in respectfully asking the government of Taiwan, whose commitment to democracy in a region plagued by non-democratic regimes we appreciate and applaud, to return through a political act the confiscated sacred land to Tai Ji Men and publicly confirm that, as Taiwan’s Supreme Court stated, they never violated the law nor evaded taxes. It would be a small step for Taiwan’s government, but a crucial one to tell the world Taiwan is truly committed to freedom of religion or belief and to the protection of religious and spiritual minorities that were once persecuted by its authoritarian and post-authoritarian regimes.” (A copy of the petition is available here.)

The petition was quickly signed by over 100 people, including Prof. Massimo Introvigne, managing director of the Center for Studies on New Religions (CESNUR) and editor-in-chief of Bitter Winter magazine; Rosita Šorytė, representative of European Federation for Freedom of Belief; Marco Respinti, director in charge of Bitter Winter magazine; Dr. Donald Westbrook, a lecturer for the Library & Information Science Department at San Jose State University, USA; Dr. Holly Folk, professor of humanities and social sciences at Western Washington University; Dr. Alessandro Amicarelli, president of European Federation for Freedom of Belief; and others.

The organizers of these two forums encourage everyone to pay attention to the Tai Ji Men case and join others to sign a petition, hoping to help make Taiwan a true democracy that respects its people’s human rights and religious freedom so as to achieve the motto of the IRF Summit: “Religious freedom for everyone, everywhere, all the time!”

Tai Ji Men Qigong Academy: Tai Ji Men is an ancient menpai (similar to school) of qigong, martial arts, and self-cultivation. It has carried forward the wisdom of Daoist philosophy, one of the highest philosophies of humankind. It is an international nonprofit cultural organization. Its contemporary zhang-men-ren (grandmaster), Dr. Hong, Tao-Tze established the Tai Ji Men Qigong Academy in 1966, and since then it has grown to 15 academies worldwide.

Dr. Hong teaches his dizi (similar to disciples) methods to achieve physical, mental, and spiritual balance, and tens of thousands of families have benefited from his teaching. At Tai Ji Men, martial arts and wisdom have been passed down from the shifu (master) to his dizi. Through this time-honored tradition, the shifu and dizi promote the Tai Ji Men culture and martial arts around the world while embodying what is true, good, and beautiful as well as spreading the ideas of conscience, love, and peace. Over the past half-century, the shifu and dizi have self-funded trips to over 300 cities in 101 nations to conduct more than 3,000 cultural performances and exchanges and have been recognized as “International Ambassadors of Peace and Goodwill.”

A photo accompanying this announcement is available at https://www.globenewswire.com/NewsRoom/AttachmentNg/8ec2c8c4-bd12-45c4-a971-b188ce910181. The photo is also available at Newscom, www.newscom.com, and via AP PhotoExpress.